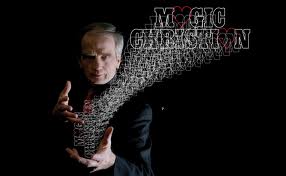 For several years now, Magic Christian has researched the life and works of, Johann Nepomuk Hofzinser, the father of all card conjurers, who was also a contemporary of the singer, actor, and playwright Johann Nestroy. In his Salon in Vienna’s Wollzeile, (and later in the Himmelpfortgasse and the Walfischgasse), respected people from Vienna’s high society would meet to enjoy his “Hours of Deception”. HOFZINSER was noted for skilfully blending political satire and comments on current events into his performances. HOFZINSER began work as a commercial trainee in the family business, later he worked as a clark in the Financial Department. He was sponsored by Count Stadion von Warthausen, as was the well-known Austrian dramatist, Franz Grillparzer. Through his presentations of magic, which were by invitation only, HOFZINSER was accepted into the upper classes of Vienna’s society. The local and international press applauded his inventive and entertaining presentations that made magic “socially acceptable“. His creative ideas influence magicians to this very day and he is rightfully referred to as the father of parlour- and card-magic. The card experiment “To think and forget”, “Vision of an Insane”, his watch-tricks, the “Rose-Mirror”, the “Appearing Lady” and his unforgettable card-magic were all parts of an extensive repertoire. “The Professor” Dai VERNON often mentioned HOFZINSER in his books. He said that his motto “be natural” leads back to HOFZINSER’s performances. (Read more…)

Magic Christian is a magician from Vienna, Austria. In 1973, 1976 and 1979 he won the first prize in the category of Manipulation at FISM. He started researching the life of Johann N. Hofzinser in 1992.